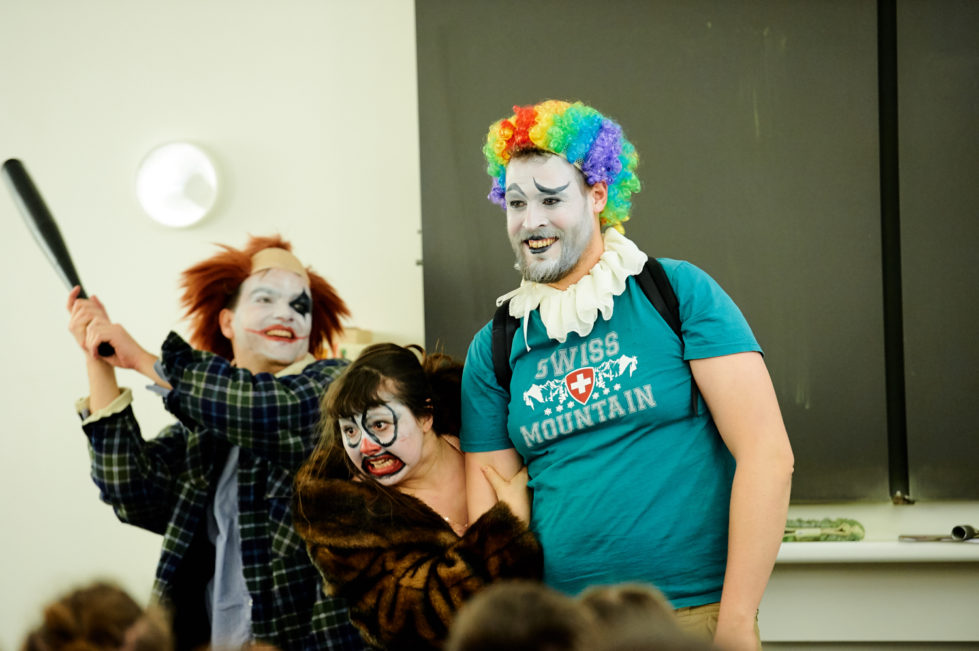 With “Comedy (AT)”, the Theater der Peinlichkeit association is already implementing its fifth project. After the stage work “Theater der Peinlichkeit” (produced as part of Freischwimmer 2015), “Stephan Stock plays Ulysess” (Gessnerallee 2016, invited to the monologue festival at Theaterdiscounter Berlin), “The Trap” (Gessnerallee 2017) and the classroom theatre play “Mobbing Clowns”, which premiered at the Fabriktheater Zurich at the beginning of the year.

Since its foundation, Theater der Peinlichkeit has been on a path to connect with diverse places and people and to connect performative theatre with new contexts. Since the first and name-giving production “Theatre of Embarrassment” the group has been dealing with the repertoire of forms of autobiographical theatre which is confronted with all possible and impossible contents and discourses. Thus, for example, we dealt with characters and narratives from computer games, as well as with a work of world literature. With “The Trap” and “Mobbing Clowns” we moved out of the theatre, onto concert stages, into the classroom and the school auditorium. The goal always remains to go out from oneself and the people one meets and to expose oneself to this encounter in a new way.

Stephan Stock is co-founder of the group vorschlag:hammer (vorschlag-hammer.de). With their first production “Vom Schlachten des gemästenten Lammes und vom Aufrüsten der Aufrechten” the group won the jury prize of the 100 Grad Festival (HAU Berlin) and the prize of the Körber Studio Junge Regie (Thalia Theater Hamburg). The group vorschlag:hammer was artist-in-residence at the Düsseldorf Schauspielhaus for two years as part of the Doppelpass project of the German Federal Cultural Foundation. Since 2016, vorschlag:hammer has received top-level funding from the state of North Rhine-Westphalia and works regularly at the Ringlokschuppen Ruhr, where the play “Die Ausgrabung” last premiered in 2018. In addition, they are on tour with another Doppelpass project entitled “Organisms” until 2020 at the Roxy Birsfelden and the Schlosstheater Moers.

Stock is also co-founder of the paradoxical collective neue Dringlichkeit (nd-blog.org) in Zurich. In 2013, he won second place with neue Dringlichkeit at PREMIO (Nachwuchspreis Theater/Tanz, Switzerland) with the project “Neue Männlichkeit” (premiere Gessnerallee Zurich 2014). With the theatre group yuri500 and the play “Rede an die Menschheit” he won the audience award at the Treibstoff Theatertage Basel 2013.

Since 2015 he has been producing his own productions with the association “Theater der Peinlichkeit” with collaborators*.